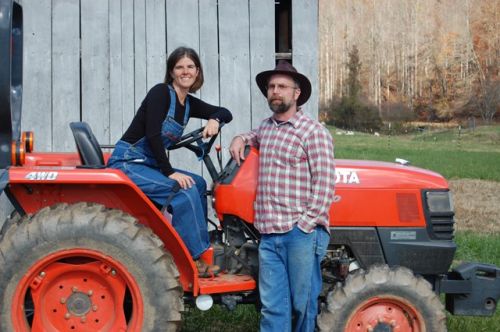 For many vegetable growers, tomatoes are a staple summer crop. Tomato growing poses several risks that the farmer takes on in an effort to reliably deliver this highly sought produce item. Farmers fight off diseases with tactics ranging from mulching to organic chemicals, like Serenade and copper. Most rely on luck as their best ally.

A humid environment can lead to an entourage of diseases that can decimate a healthy tomato field. Fungal diseases and blight are encouraged by periods of heavy rain and high humidity. Both can cause irreparable damage very quickly.

At the base of the Blue Ridge mountains, in the foothills of Wilkes County, Jason Roehrig and Shiloh Avery at Tumbling Shoals Farm are affected by weather conditions that can make vegetable growing, especially tomatoes, a high-risk endeavor. The two full-time farmers rely heavily on a bountiful tomato crop, selling the produce at farmer’s markets in Hickory and Boone, where customers expect select from a plump, deep red batch of tomatoes each season.

Tumbling Shoals was established by Jason and Shiloh in 2008. They began farming as a partnership in 2003. Shiloh attended Central Carolina Community College and received a certificate in sustainable agriculture. The two bought the farm in Wilkes County in 2007. They serve two farmer’s markets, provide produce to several local restaurants, and have a 50+ member CSA.

Jason and Shiloh applied for a grant to build infrastructure on their farm that would help reduce risk of disease on their tomato crop. They assembled a quarter-acre field-scale structure, designed by Haygrove, that could be moved around the farm to different areas. The structure would serve as an umbrella for the tomatoes, and other crops sensitive to moisture (such as flowers), to divert precipitation away from the plants.

The system allows Jason and Shiloh to better control the watering regime for the tomato plants while still being able to grow plants in an essentially outdoor environment. The structure is easily confused with a hoophouse, which is mainly for the purposes of season extension by trapping warm air in an enclosed environment. Hoophouses are typically smaller than the ‘umbrella’ structure and aren’t manufactured primarily for disease prevention like the Haygrove structure.
Jason and Shiloh plan to move the structure with the tomatoes in accordance to a crop rotation schedule. It is also possible to set up the structure on uneven terrain; a critical factor in farms in mountainous locations like Tumbling Shoals.

Jason and Shiloh hope to gain an estimated annual income between $11,000 and $19,000 from the tomato production. They estimate that their potential profit will be anywhere from $1,700 to $9,700 from the quarter-acre plot with the structure installed.