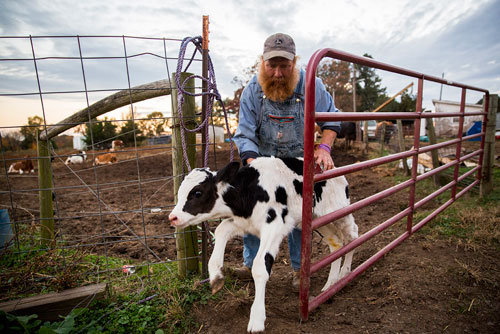 Ran-Lew Dairy is owned and operated by Randy Lewis, a long-time dairyman who has held on to the family farm that he grew up on by developing an innovative new micro-bottling plant to complement his farm’s dairy parlor.

Randy worked on the farm alongside his grandmother from the age of nine, learning to milk and care for the cattle. He now lives on the same farm in the house that his father built and he intends to stay there with his family, continuing the dairy business and passing it on to the next generation. He bought the farm from his grandmother and has grown the herd to 200 head of cows. The dairy operation is almost solely operated by family members and Randy hopes to expand the operation to someday be able to hire local community members to assist with processing and bottling.

“Our goal is to support our family with this project eventually, keep our farm, and the farming way of life in our family for future generations. It also includes spreading the passion for the health environment, and sociological benefits of local, fresh foods,” he says.

Randy received a small grant in 2013 that helped him begin producing value-added products on his family’s dairy. With the grant funds, he purchased processing equipment and a refrigerated trailer to pasteurize his milk and turn it into butter, yogurt, bottled milk in a variety of flavors, and other milk products.

The counties that surround Ran-Lew Dairy were once dotted with small and mid-scale dairies. These small dairies supported families who sold their raw milk to local plants in Durham or Raleigh for distribution throughout the state and the Southeast. According to Randy, in the mid-1980s the industry bottomed out partly because of a decision to rid the counties of a commission that kept dairy prices stable, which had in turn helped to keep farmers in business. Since then, many area dairy farmers have curtailed their milk production and have started beef cattle production or left farming altogether.

North Carolina’s dairy heritage can still be seen in the rolling pastures of the central Piedmont, as it can in many regions across the country where milk production was centered historically, such as upstate New York and Pennsylvania. The innovative on-farm enterprise development happening at Ran-Lew Dairy may hold promise for struggling dairy farmers looking to find new ways to reinvent their farms and create thriving new businesses.

Randy Lewis describes his dairy operation and his project to UNC-TV: