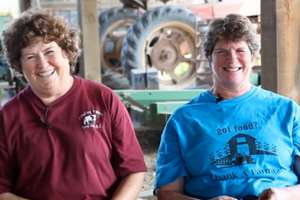 When life gives you curds, bake a cake. That was the lesson that Ann Campbell learned when she tried her hand at making cheese for the first time. Her sister, Janice, had been unsuccessfully trying to produce cheese using fresh milk from the family’s dairy herd when she decided to give it a try, too. She ended up with results that were underwhelming: gooey piles of curd that resembled mozzarella as much as pea soup does ice cream. Instead of tossing the goop, she combined it with more ingredients, poured the mixture into a pie crust, and baked it. The cheesecake brought praise from family members and neighbors, and a new on-farm enterprise was born.

Lindley Farms Creamery is a fourth generation family farm in the rural community of Snow Camp, North Carolina. Sisters Ann Campbell and Janice Lindley grew up on the farm during the 1950s and 60s along with their brother Sammy. The two sisters left to pursue other careers but deeply missed life on the farm. Their brother Sammy, who had joined the Air Force, also returned to the farm. Together, the three siblings began to grow the Lindley Farms herd to its current size of 100 milking cows. Sammy passed away in 2006, and the dairy keeps going in his honor. Ann’s daughter Casey helps with marketing and running the dairy operation. Their nephew J.B. has served as the herd manager, ensuring that the family farm will continue for another generation.

Only a few years ago, the future of the farm wasn’t so certain. With milk prices dropping and input costs increasing, Ann and Janice worried that their dairy, like so many other dairies across the country, would be at risk of running into financial trouble. Janice explains the importance of developing their new product.

“The cheesecake idea came about as an effort for us to try and save our family farm. Our goal is to market and sell our own milk and eliminate the middle man. This way we can continue to support our families which depend on the farm. If we are successful, we will be able to keep our small farm running which supports at least four families.” – Ann Campbell

Ann and Janice knew that their family’s dairy would have to diversify and specialize in order to thrive. The sisters decided to start a creamery in an old feed store converted for that purpose. They both became licensed cheesemakers. While they were able to get started by using equipment on loan from North Carolina State University, they knew they needed to invest into their own infrastructure in order to craft products more attractive to consumers. They purchased their own pasteurizer and the kitchen equipment necessary for producing the cheesecakes on a larger scale. In addition to the equipment, they invested in labeling tools to create appealing and eye-catching products.

The sisters have experimented with producing other value-added dairy products, but the cheesecakes have been their biggest hit. These are made from simple, wholesome ingredients with no added preservatives. Janice describes their process: “We take fresh whole milk straight from our cows, pasteurize it in our 50 gallon pasteurizer and then make it into fresh mozzarella cheese curds. Once the curds are ready, we blend them with a few special ingredients, bake them in a graham cracker crust, and then glaze them with our special sour cream topping. Our cheesecakes are made entirely on our farm.”

Although Lindley Farms Creamery is succeeding in many ways as a deeply-rooted, diversified family farm, they have struggled in their efforts to compete in a market that is characterized by an extreme degree of corporate concentration and dominated by a few large companies. Their answer to the challenges has been to diversify. The Creamery recently expanded into producing other value-added products, including perfectly-textured mozzarella, ricotta cheese, and soft cheese spreads that have sold successfully at several farmers’ markets in the region.