Sprouting Grain as an Alternative Feed for Goats 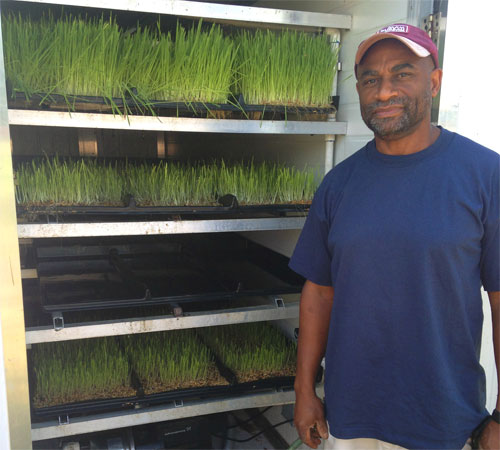 In a pasture dotted with cedar trees and bordered by a gray wooden fence, goats and cattle graze. A large white box sits at the edge of the pasture, looking something like an out-of-place refrigerator. An electrical cord runs from it toward a small farmhouse. As Hulan Johnston walks over to the box, his herd of goats lift their heads and break into a gallop. They quickly surround him. He opens the door, revealing bright green grass growing in individual trays. He lifts and tosses a few of these mats of grass into the feeding trough for his goats. They eat with gusto, elated by the tasty young shoots.

Hulan describes his livestock feeding system as “a hydroponic growing room that has been specially developed to sprout grain and legume seeds for a highly nutritious yet cost effective livestock feed.” His ability to describe technical details and his love for farming reflect a career in industrial arts and agriculture. Hulan received his Bachelor’s degree in Industrial Education and his Master’s in Vocational Education in 1994. When he is not teaching industrial arts, he is tending to his animals or cultivating corn and soybeans on his family’s farm.

After many years of farming conventional cash crops, in 2009 Hulan started to expand into new markets by raising meat goats. Hulan knew that to be successful he would need to have a consistent and affordable supply of high quality feed. He met another farmer in his county who had overcome this obstacle by utilizing a refrigerated unit for sprouting grains. Hulan received a grant in early 2014 in order to begin producing his own sprouted grain. In his proposal for his grant project, he wrote, “Farmers and ranchers should consider implementing new technologies to compete in today’s world market. By applying these innovative practices, it will reduce production cost and stabilize the threat of adverse climatic conditions.”

“In the South,” he continued, “farmers and ranchers are faced with high feed costs, reduction in cropland acres for production, changing weather patterns, and the increasing consumer demand for healthy locally grown meat.”

On top of the challenges related to feed, farmers must contend with the fact that goats are susceptible to many parasites and diseases. Hulan has found that using a feeding system based on sprouted grain has multiple benefits for maintaining a healthy herd. Grain sprouting equipment can produce a nutritious feed in an environment with a low risk of harboring disease. In addition, Hulan’s grain sprouting unit requires only 15 amps of power and is highly transportable. He has also experimented with growing oats, wheat, and corn, trying different combinations of sprouts. So far, he has found that oat seed germinates the most consistently and, of course, the goats enjoy the results, too.

Producing sprouted grain requires little labor. To illustrate the low­maintenance system, Hulan places a tray of seeds on a shelf in the unit, and they are automatically watered by an irrigation system that uses minimal water. Once the stalks reach 6 to 8 inches in height in about 6 days, he removes the tray and tosses it into the goats’ trough. He calls the finished product a “biscuit,” and the goats seem to find it just as tasty. After removing a few “biscuits,” he replenishes the trays with more seeds in one side of the unit. This pushes the earlier batches toward the other side, resulting in a successional, consistent system where seeds go in one side and sprouts come out the other. Hulan hopes that his project will demonstrate a new type of technology in low­cost feed production, and he plans to document its impact on his farm.