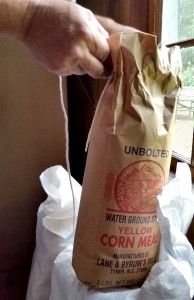 A fifth-generation cotton farmer, Butch Byrum lives and farms near the town of Edenton on the North Carolina coast. The fields of his family’s farm stretch far over the horizon with corn, cotton, and soy. He has grown these crops using conventional methods for years, but now he sees an opportunity to grow organically. He recently began producing organic cotton and learned that he would need to establish a crop rotation plan to help manage pest populations and reduce the risk of disease. He decided that organic corn would be a good fit for his farm. It would also create an impetus for fixing up the family’s old grist mill.

Pictured above: A historical photograph of the mill that was previously located on the pond where Butch Byrum’s renovated grist mill now sits.

For many years, Butch sold cornmeal ground in the family’s mill during the holiday season. He now hopes to sell it year-round, marketing it not just as a locally milled, but also as an organically grown product. In late 2014, he applied for and was later awarded a grant from the Agricultural Reinvestment Fund to carry out his plan. Thanks to the grant he will renovate and reopen the mill within the year.

Butch took us on a tour of the mill, which was originally operated by his grandfather and a close family friend. At Dillard’s Millpond, bald cypress trees strung with Spanish moss tower over the swampy pond. A mill has been on the pond since 1762.

Pictured above: The grist mill is housed in a building at the edge of the pond.

His family’s operation was later moved into a separate building on the same property and converted to run on a gas-powered turbine. It still grinds grain with a massive millstone carved from a granite deposit in the North Carolina mountains.

Butch has to renovate the mill in order for it to pass inspection as a food processing facility, as well as install a restroom for its operators and others to use. He also needed a cold storage room to keep the meal refrigerated and free of insects and their larvae. He was advised that if the cornmeal remains below 57 degrees Fahrenheit, insects won’t be able to survive and contaminate the meal. The grant he was awarded was used primarily to make these infrastructure improvements. Soon, the site will again attract visitors hoping to see a working grist mill and pick up some organic cornmeal, perhaps on the way to a fish fry on the coast.

To say that Butch is excited about the project would be a vast understatement. The mill is a place that he holds near to his heart both as a family heirloom and an asset to the community. Butch hopes to open the grounds and the mill up to the public later this year and is looking forward to sharing the history of the site and educating visitors about how the grist mill works.