Aquaponics in an Old Tobacco Greenhouse 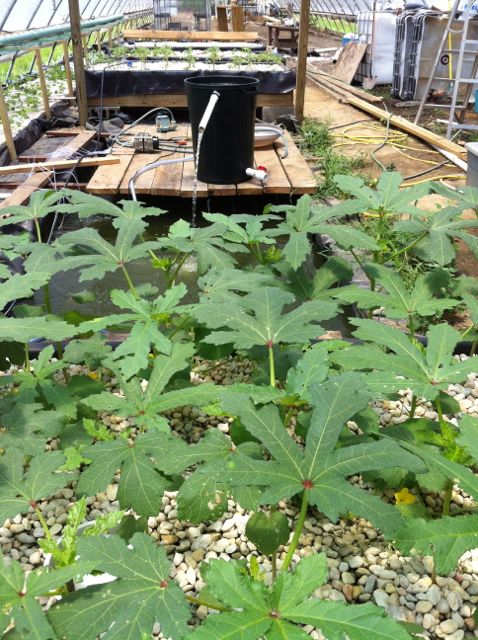 The Worley Family Farm has been a fairly conventional farm for generations, growing common row crops and cash crops such as tobacco. Chandler Worley is the sixth generation to farm his land in Cerro Gordo. He grew up on the farm, helping his father manage crops of tobacco, corn, soybeans, and wheat, until he left to earn a degree in Agronomy at North Carolina State University. After Chandler graduated in 1977, he went back to farming. His father turned the family farm over to him to manage a year later.

The Worley farm cultivated the same cash crops for many years until the tobacco buyout. After this major shift, Chandler decided to transition to no-till farming in 2004. He still grew the same cash crops but began to experiment with strawberries and other produce. The family began to help him market this produce to local consumers. They established a roadside produce stand and began selling at farmer’s markets in North and South Carolina.

“Our goal for this project is to take a greenhouse that I used to use to grow tobacco plants and turn it completely into an aquaponics garden or farm system that will provide clean, safe, and organic produce for humans to eat. Additionally, my goal is to transition our farm from a tobacco dependent farm to a sustainable farm, which produces a steady income every week. Furthermore, our goal for this project is to run our greenhouse off of solar power for heat and electricity, and any other future greenhouses that we might build as we expand this project indefinitely.”

Recently, Chandler devised a new plan to continually adapt the farm to the new agricultural economy. He started researching aquaponics, a soil-less, low impact system for simultaneously growing fish and produce in a closed loop, ecologically balanced environment. Chandler’s goal was to turn the old tobacco greenhouses- formerly used for starting the tobacco plugs before going out in the field- into a complex, high output agricultural system that used little space and little external inputs.

It started with a small prototype: one above ground fish tank and a long raised bed built with framing. The prototype worked very well and Chandler wanted to expand and make improvements in order to make the aquaponics operation more profitable. With a Grant in 2014, Chandler, with the help of his son French, expanded the operation in the greenhouse to have a larger, in the ground fish pond, several more raised beds with framing that increased vertical space, and an improve system for circulating water. The pond was filled with thriving tilapia, releasing their nutrients in the water that was circulating through the roots of many vegetable plants. There is a wide variety of vegetable plants grown in the raised beds purely in river pebbles and nothing else. Okra, squash, cucumbers, melons, celery, leaf lettuce, and other delicious produce could grow to their full potential on this system, vining up trellises, creating canopies for plants underneath that desire shade. The Worley’s have created a mini-ecosystem, where the fish and the plants rely on one another for survival. The little greenhouse space will be packed with edible goods like an exotic, edible jungle.

“The fish benefit the plants in providing fertilizer to nourish the plants, while the plants provide the proper environment for the water to stay clean. This in turn allows healthy plants to thrive in an environment that is safe and natural, while also allowing the fish to remain healthy. Therefore, each provide the nourishment for one another and in turn are a nourishment to human life.”

Chandler hopes this system will provide him with just as much produce, if not more, than the traditional row cropping that him and other farmers in the area have done for generations. He sees the aquaponics system as the new, lucrative method of farming, where chemical inputs aren’t required and land and soil is not gobbled up by low density row crop farming. The system needs not many pesticides because the environment naturally inhibits weeds, insect pressure is reduced by being grown indoors, and the climate can be better manipulated to reduce stress on the plants.

The Worley’s want to show interested folks the benefits of their system by having a dinner on the farm where diners get a complete meal all grown from their intensive aquaponics system. The plate could be loaded up with freshly cooked fish filets and a large variety of vegetable dishes. A meal sourced from just a few square feet of space would inspire new ideas in food for the Worley’s rural community.

Chandler also hopes that other farmers will be inspired to come up with creative uses for their own tobacco greenhouses that are sitting idle on their farm. He believes his aquaponics operation can generate an income of $100,000 annually.